This seminar was presented at IBEX 2021 as part of the Education Conference Seminar Series. The full seminar is now available in recorded format for $65/person.

Almost everything about lithium-ion batteries, from energy density to cycle life, seems to be constantly improving in recent years. It appears that lead-acid batteries are being left further and further in the dustbin of outmoded technologies. But behind the scenes potentially dramatic improvements in lead-acid technologies are being intensively explored, including radically improved energy density and cycle life. And lead-acid still holds the edge in several performance categories, notably a tolerance of temperature extremes and operator error. In this seminar participants will learn why it is too early to write off lead-acid batteries, and where their application can still be the best technology for the task at hand. 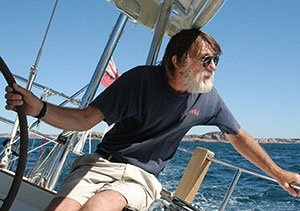 Nigel Calder
Speaker & Author
Calder Marine Enterprises and Professional BoatBuilder magazine
Nigel Calder got into motorcycles and sailing dinghies as a teenager and has never been far from mechanical things and boats ever since. He and his wife, Terrie, built and lived on various canal and sail boats, including a Malo 45 that sported experimental electrical and propulsion systems. It was used for extensive testing of hybrid propulsion systems which, in recent years, morphed into a multi-year development of advanced generator technology now sold under the Integrel brand name.

Nigel and Terrie have sailed in the North Sea, the Atlantic from Faroe Islands to Portugal, the U.S. east coast, the Bahamas, and extensively in the Caribbean.

Nigel is best known for his Boatowner’s Mechanical and Electrical Manual, now in its 4th edition, and his Marine Diesel Engines, in its 3rd edition. In addition to hundreds of magazine articles, he has also authored a Cruising Guide to the Northwest Caribbean, Cuba: A Cruising Guide, Nigel Calder’s Cruising Handbook and How to Read a Nautical Chart. He recently released a memoir of his family’s first long cruise titled Shakedown Cruise.

Brought to you as part of the IBEX Education Conference and in partnership with Professional BoatBuilder magazine.